Bicycling is a popular form of transportation and common leisure activity that many people in the Las Vegas area enjoy. Locals may choose to bike to and from work. Tourists to the Las Vegas area often enjoy biking around the city and out on hiking trails in the desert. Biking is a healthy, relaxing, and usually safe activity that many bicyclists enjoy. But things can turn dangerous, or even fatal, when a bicyclist is involved in an accident with a motorized vehicle.

Bicycle collision injuries are unfortunately all too common, especially in Las Vegas. In most cases involving bicyclists and automobiles, the person driving the car is almost always at fault in the accident. There are other reasons for bicycle accidents to consider as well. Our bicycle accident lawyers at Valiente Mott have knowledge in all aspects of bicycle equipment, accident reconstruction, roadway design as it relates to bicyclists and these factors may be a crucial part of your case. 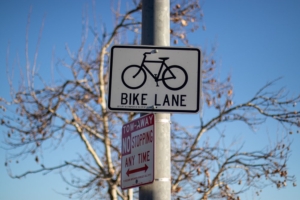 Numbers from the Insurance Institute For Highway Safety reveal some alarming trends. According to the latest numbers:

The Problem with Bicycle Collisions

Cyclists are some of the most vulnerable people on the road. They lack the protection of a vehicle don’t have the speed of a motorcycle to escape a dangerous situation. What might be an ordinary fender bender with another car can be fatal when a cyclist is involved.

Injuries to cyclists run the gamut from:

The severity of injuries becomes magnified in a bicycle accident, and many injuries require long-term care. Our Las Vegas car accident lawyers at Valiente Mott can pursue fair compensation for any death or injury caused by a negligent driver, even covering ongoing medical expenses.

Most Common Causes of Bicycle Collisions

Bicyclists have to remain vigilant when it comes to paying attention to what the vehicles around them are doing. But sometimes accidents involving motor vehicles are unavoidable. The trouble is that bicycles are so much smaller than other vehicles on the roadway. Bicyclists can be difficult for drivers to see. Some of the most common causes of bicycle accidents include:

Motor vehicles are required by law to treat bicycles the same as they would treat other motor vehicles on the road. But drivers who are involved in accidents with bicycles often claim that they could not see the bicyclist. Due to bicyclists’ small size, there is little to protect bicyclists from serious harm, or even death, during a collision.

For their own safety, bicyclists need to be prepared for drivers not to see them. This does not mean that drivers are free from liability when it comes to bicyclists. Drivers who cause harm to bicyclists should be held accountable for the damage that they have caused. If you have been injured, you need to seek compensation from the driver who is liable.

What to Do if you are In a Bicycle Collision

If you find yourself involved in an accident with a motor vehicle, it is important that you immediately get the medical attention that you require. Don’t worry about anything else before you seek medical treatment for your bike accident injuries. Even if you think that you are unhurt, you should make a point to be checked out by a medical professional, just to be sure. Next, you should speak with police and report the accident.

If you are not injured too badly, and you have a camera phone, you should take as many pictures of the accident, your bike, and your injuries as possible. These photos can be useful evidence later down the road.

Finally, you need to speak with an experienced Las Vegas bicycle accident attorney about your situation. You have a limited amount of time in which to bring a claim against those who are responsible for causing your injuries. An experienced bike accident lawyer will make sure that your rights are preserved. Let us help you after your bicycle accident. Contact the car accident attorneys at Valiente Mott today.

We would like to hear from you so we can provide you with a free evaluation.  It’s best to always consult with an Injury Lawyer for any type of legal advice regarding your injuries.