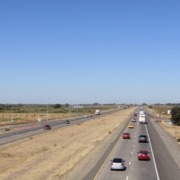 Per reports from troopers with the Nevada Highway Patrol, the accident involved a Clark County Fire Department (CCFD) heavy rescue truck that rolled over on the eastbound 215 Beltway at the exit to southbound Interstate 15.

Medics transported four CCFD firefighters to UMC with minor injuries. Three were treated and released, and one is still being evaluated.

The truck was reportedly on its way to another accident scene near I-15 and the 215 Beltway when it rolled. All personnel got out of the truck on their own, according to Clark County Deputy Fire Chief Warren Whitney.

The incident that prompted the emergency response occurred just after 5:30 a.m. and involved only minor injuries, but EMS took a woman involved in that wreck to a local hospital.

Another person was reportedly trapped in the earlier wreck, but Whitney said the fire truck collision did not cause any delay in rescuing the victim.

Traffic closures on the Beltway lasted until just before noon, and police asked commuters to find alternate routes.

The investigation is ongoing at this time.

Our thoughts are with the injured victims and their families. We hope for their full recovery.

Officials with the Nevada Department of Transportation show nearly 52,000 reported car crashes statewide in one year alone. And officers with the Las Vegas Metropolitan Police Department added that almost 45% of that total occurred in Las Vegas.

Clearly, these motor vehicle accidents are an unfortunately common fact of life in Nevada. This is particularly true when it comes to the bustling streets of Las Vegas. And victims and families are particularly vulnerable in the aftermath of fatal accidents.

After a serious auto accident, those affected often cope with financial difficulties, long-term physical issues, and serious emotional trauma. Sadly, when victims succumb to their injuries, family members must deal with expensive medical and funerary costs in the aftermath.

However, if you have suffered injuries in an accident or lost a loved one, you may have legal recourse. You can and should reach out to a Las Vegas auto accident attorney right away. At Valiente Mott, we believe victims are entitled to fair, full compensation. This compensation can cover losses moving forward so that you never have to pay out of pocket.